Tandle Hill - A View from a Hill. An Odyssey from Sheffield to Middleton with The Chameleons 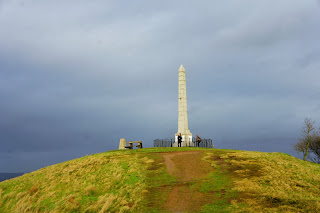 So here are the photos from my trip-expedition from Sheffield to Tandle Hill in Middleton last saturday 21st of December (In case anyone wants to go something I strongly recommend). 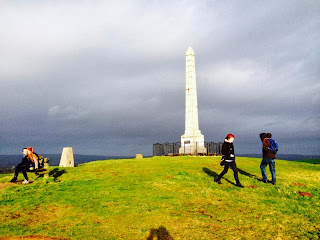 Our Japanese friend  Hisaaki Shintaku  (Chameleons n1 fan in japan) was visiting England this week so a few days before we decided to take the opportunity to pay our respects to this emblematic place for any fan of the 80s seminal band The Chameleons. 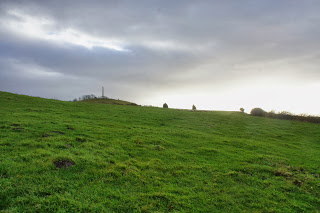 We got a train in Sheffield very early in the morning (Sometime about 7 am) and after dropping off Hisaaki's luggage at his hotel in Manchester Piccadilly, we went to meet our good friends Cath Aubergine and Nick Harrison. Then we jumped on the 17 bus and headed to Middleton. 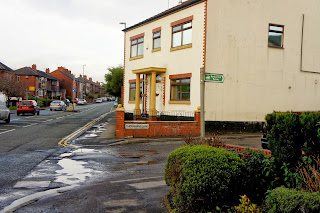 Thornham lane n 17 bus stop. Here is where everything starts!

In Manchester city center the sun was shining but as soon as we were getting closer to Middleton the sky grew darker (this is Manchester, after all!) but when we got off the bus the clouds seemed to slowly disappear (the Mancunian gods were on our side)! 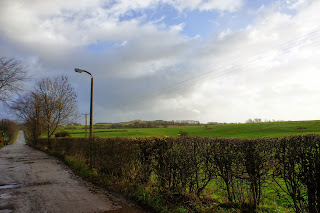 Tandle Hill at the bottom

The trek starts at Thornham Lane were the 17 bus drops you off. Then you have to get the path towards the hill. As soon as you leave a few houses on your left you are thrown into the deep English countryside. Half of the fields were under dark gloomy skies and the other half was bathed in stunning morning sunshine. Magic light and the perfect scenario for the winter solstice!
It was very beautiful indeed.
Sometime on the way about 10 minutes walking, you will see a small church on your left. 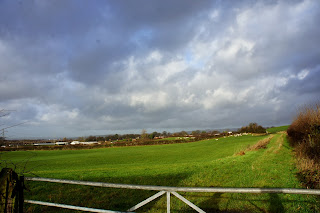 In order to get to the hill from Thornham Lane you have to cross the motorway and here is where you find "The Bridge" which appears on and gives name to the masterpiece Chameleons debut album "Script Of The Bridge". 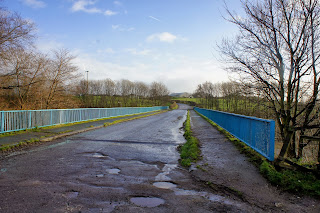 The Bridge of the Script!

It's certainly …well…just a bridge over the motorway but believe it or not we all felt very thrilled to be  finally in such an emblematic place. 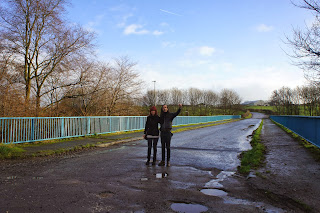 Once you cross the bridge and a few yards away you will bump into the Tandle Hill Tavern which is when you have to turn on your right and start climbing to the top (another 10 minutes).
From the bus stop to the top of the hill it took us about 40 minutes over all I would say and without a doubt its a pretty pleasant experience (If you are lucky with the weather as we were!) .
The walk its very easy for anyone and good for walking the dog, jogging or just hang around the park a Sunday morning with the kids.
The view from the top was ace, a classic painteresque scene of an English countryside and you could see in the far distance Oldham and also Manchester city center. 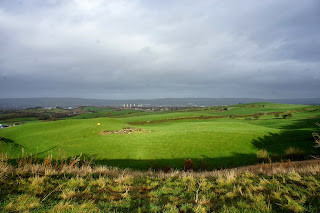 At some point it was very windy at the top and it was getting cold so we decided to get some shelter in the forest right behind the hill, which is the route that leads to the car park from the main entrance of Tandle Hill park. But like I said before we all agreed before hand to follow the exact route that the boys would have taken more than 30 years ago. 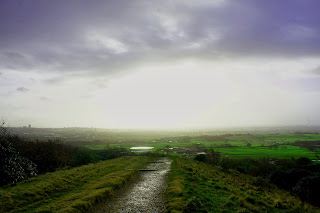 And then…….when we were in the forest surprise, surprise!!

Reg Smithies and his family turned up to the park! They took the dog for a walk and also agreed to spend a nice saturday morning with the kids and us, mad pilgrims. Yes! 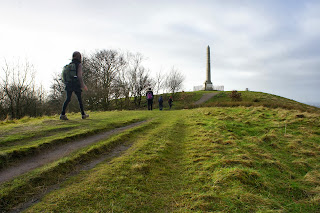 I knew before hand there were chances of Reg Smithies coming to meet us so  a couple of days before I dropped a hint to our friend Hisaaki  that there was a possibility of a special guest coming to the hill. I didn't want him to have a heart attack on the top, you know?, although I must admit I was pretty excited too!. 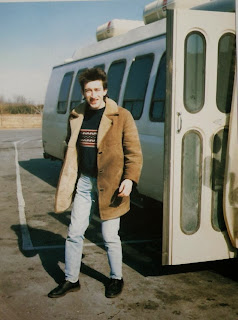 Reg Smithies. legendary guitarist on the 80s band The Chameleons 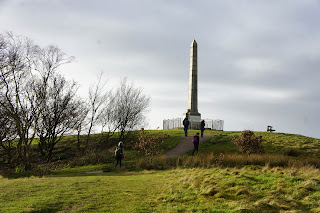 Hisaaki is an old school Chameleons fan and traveled all the way from Tokyo to Manchester to see Chameleonsvox playing the same night at the Ritz. No shit! He never had the chance to see the band with the original members before since The Chameleons obviously never played Japan.
You can imagine how happy he was when he saw on the distance the 80s guitarist legend Reg Smithies walking up the hill!
You should have seen his eyes. What a moment! 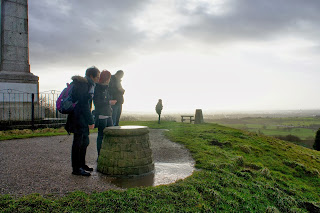 After a chat and some introductions we all went back to the top for a second time.

So there we were again on the top of the hill, and this time with  Reg Smithies enjoying the sight with us.  It was a special moment indeed.
As not was getting late and a bit chill to be honest we all agreed to go down for drink in the Tandle Hill Tavern which was sadly the end of our Odyssey.
But a well deserved pint after the exciting excursion was mandatory! 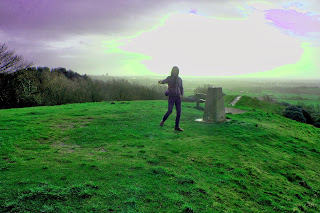 Everybody had a great time and we shared some good laughs at the pub. Reg very kindly signed some rare old Chameleons stuff and Reegs memorabilia from our friend Hisaaki's impressive collection.
Hisaaki even gave Reg a nice present: a japanese copy of a Chameleons 'Strange times' cd. He told us there were very hard to find even in Japan.
Nice one. 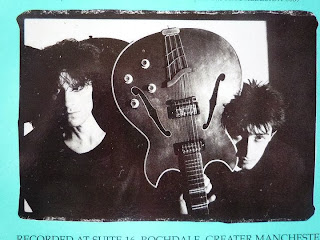 It was very nice to have a chat with Reg and also to meet his family. Its been a while since I saw Reg last time. I always had a lot of respect for the man and considered him one of the most talented musicians I ever had the pleasure to met. He can play bass, guitars, drums anything really….like Dave Fielding always says to me 'Give Reg any instrument and he will play it!'.
His old friend always has good words for him.
Reg is and always has been was without a doubt  the most private member of the band so we were very grateful that he took his time to come and meet us.

Thank you for joining us Reg! 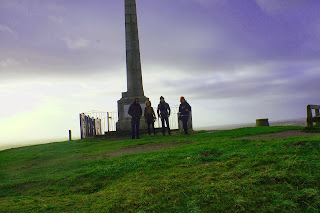 So after a few drinks we headed back to Manchester for a proper curry. Sometime later on the afternoon we parted ways, our Japanese friend went to the Chameleons Vox gig and we went back to the other side of the Pennines in Sheffield.  It was a fantastic morning and we all had a top time!. 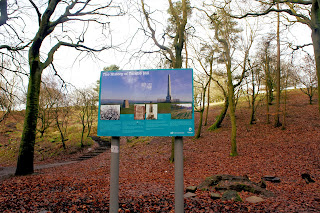 So a great Saturday winter solstice day and unforgettable  memories for everyone! 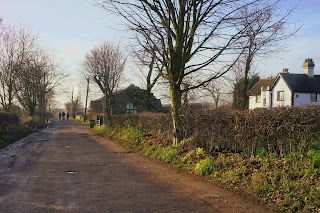 Now we know what The Chameleons  "A View From a Hill" is all about :-) 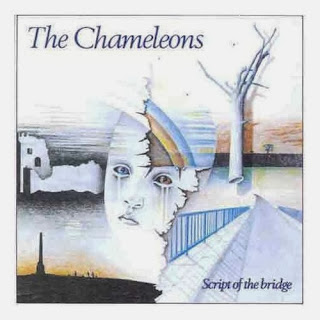 Welcome to my Blog.
This blog is my personal space to stay in touch with all my friends around the globe and also for publishing some of my travel photographs and other random thoughts.
I hope you enjoy it.
Ta

who is online counter blog counter